Giacomo has been by Dawn Marie's side since 2014. He's traveled with her on buses, trains, plains, and ships throughout Italy, Sicily, New York City, Baltimore, and Key West. Words can't describe the comfort, healing, and pure joy he brings.

He has appeared on Lifetime Channel's The Balancing Act in the Burt's Bees Fashion Segment, three of his Mommy's video shoots, and in a story on Bullying Prevention and Human Trafficking for WPTV. He also appeared in publications including the Palm Beach Daily News Shiny Sheets and Florida Woman Magazine. 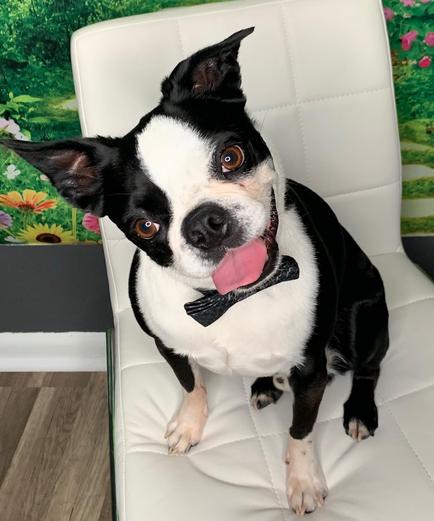 Dawn Marie is an actor and host for many popular TV commercials, TV shows, infomercials, and web commercials including MSC Cruises, and Hewlett Packard. She can also be heard in radio ads across the country as a voice-over artist. Since graduating from the American Musical & Dramatic Academy in 1995, she has appeared on such TV shows as Law & Order, Sex and the City, Burn Notice, and The Glades. Dawn Marie has modeled in New York City, D.C., Denver, and South Florida since 1998. She has done runway, showroom, catalog, fit modeling, and trade show events for such clients as Sag Harbor, Levis, Gloria Vanderbilt, Calvin Klein, Demetrios Bridal, Bari Jay Bridal, Venus Bridal, Alfred Angelo, Ellie Tahari, Assar Eveningwear, and Nike. She has also appeared in print for such companies as Microsoft, Frito-Lay, SHAPE Magazine Atlantic Ave Magazine, Jazziz Magazine, 1-800-Pet Meds, Porsche, and many more. She has graced the cover of Palm Beach Gardens Magazine is currently on the cover of Florida Woman Magazine.